I was recently told that I am an ideas guy. Probably the best compliment I’ve received. It got me thinking, and I thought I’d share a story.

With two remarkable people, Nick Craswell and Julie Farago, I invented infinite scroll in MSN Search’s image search in 2005. Use Bing’s image search, you’ll see that there’s only one page of results – you can scroll and more images are loaded, unlike web search where you have to click on a pagination control to get to page two. Google released infinite scroll a couple of years ago in their image search, and Facebook, Twitter, and others use a similar infinite approach. Image search at Bing was the first to do this. 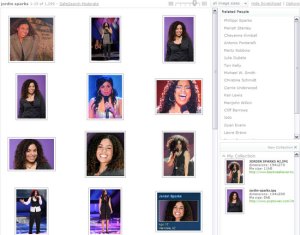 Over a pizza lunch, Nick, Julie, and I spent time digging in user sessions from users who’d used web and image search. We learnt a couple of things in a few hours. At least, I recall a couple of things – somewhere along the way we invented a thumbnail slider, a cool hover-over feature, and a few other things. But I don’t think that was over pizza.

Back to the story. The first thing we learnt was that users paginate in image search.  A lot. In web search, you’ll typically see that for around 75% of queries, users stay on page one of the results; they don’t like pagination. In image search, it’s the opposite: 43% of queries stay on page 1 and it takes until page 8 to hit the 75% threshold.

Second, we learnt that users inspect large numbers of images before they click on a result. Nick remembers finding a session where a user went to page twenty-something before clicking on an image of a chocolate cake. That was a pretty wow moment – you don’t see that patience in web search (though, as it turns out, we do see it at eBay).

If you were there, having pizza with us, perhaps you would have invented infinite scroll. It’s an obvious step forward when you know that users are suffering through clicking on pagination for the bulk of their queries, and that they want to consume many images before they click. Well, perhaps the simplest invention would have been more than 20 images per page (say, 100 images per page) – but it’s a logical small leap from there to “infinity”. (While we called it “infinite scroll”, the limit was 1,000 images before you hit the bottom.) It was later publicly known as “smart scroll”.

To get from the inspiration to the implementation, we went through many incarnations of scroll bars, and ways to help users understand where they were in the results set (that’s the problem with infinite scroll – infinity is hard to navigate). In the end, the scroll bar was rather unremarkable looking – but watch what it does as you aggressively scroll down. It’s intuitive but it isn’t obvious that’s how the scroll bar should have worked based on the original idea.

This idea is an incremental one. Like many others, it was created through understanding the customer through data, figuring out what problem the customers are trying to solve, and having a simple idea that helps. It’s also about being able to let go of ideas that don’t work or clutter the experience – my advice is don’t hang onto a boat anchor for too long. (We had an idea of a kind of scratchpad where users could save their images. It was later dropped from the product.)

The Live Search scratchpad. No longer in Bing's Image Search

I’m still an ideas guy. That’s what fires me up. By the way, Nick’s still at Microsoft. Julie’s at Google. And I am at eBay.