One day I’ll write another book. Perhaps a sports book about people and their stories, or the story of search engines and the people that build them.

I wrote my first book in 2001 with David Lane, and we rewrote it in 2003 for the second edition. I wrote another book with Saied Tahaghoghi in 2004 – the truth is I started it, and he picked up the pieces when I changed careers and countries; he’s a good man. The first book sold over 100,000 copies over the two editions (I still get a royalty check quarterly) and the second modestly (Saied and I earned our advance back). They’re both dated, old books now. 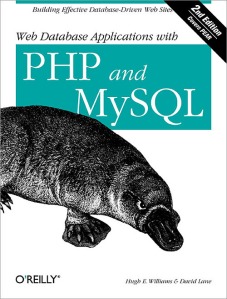 Web Database Applications with PHP and MySQL. My first book in its second English edition.

It’s thousands of hours of work to write a book. I spent at least 20 hours per week for 18 months on the first edition of the first book – that’s 1500 hours at least. I got out of bed at 5:30am and I did a few hours of writing before work. I’d also squeeze in a little more after work (typically some proof reading), and a longer period of writing on the weekend (where I’d still get out of bed at 5:30am).

Did I get rich? No. Typically, the authors get less than 10% of the wholesale book price — a couple of dollars per book sold at most. I got more than the minimum wage for the first book (roughly dividing the royalties by the number of hours by the number of authors to get an answer). The second book didn’t pay its way.

The longer I worked in a single sitting, the more productive I was. It takes a certain fixed amount of startup time to begin writing – you reread what you’ve written, edit it a little, get the context back, think about the structure of what you want to say next, and then start writing anew. But I can’t write for an extended period – it’s tiring, and I need to stop and take time away to think about what I want to do next. Three or four hour stints are the most productive for me.

When I wrote the first book, I’d count how many words I wrote in a session, and use that as a measure of success. I’d decide that I was going to write 1000 words before I took a break. It turns out, that doesn’t work for me: I’ve learnt that what’s important is sustained output, averaged over a month or so. Some days, I’ve got writer’s block. But I’ve learnt that that’s when I am doing valuable thinking – I’m working through a larger problem, or thinking through structure, or solving something that’s been bugging me for a while; sometimes, this is a subconscious activity. Other days, I’m a machine: I write as fast as I can type, and thousands of words flow. A whole chapter has been known to flow after a writer’s block.

My second book, Learning MySQL in its one-and-only edition.

Writing slows down as the book takes shape. I’ll be in the middle of a new section, and I’ll want to reference something else I wrote using something like “as you learned in Chapter <x>, the <something>”. Then I have to figure out what chapter it was, and what exactly was that <something> – that takes time. And, as the book gets longer, you repeat yourself – at least, my memory isn’t amazing enough to make sure I only say the same thing once. I’ll find myself waxing lyrical about some great idea, only to discover that it is somewhere else in the book too. Then it’s a case of figuring out where it should be – which is going to lead to editing a was-finished chapter elsewhere in the book or rethinking what I’m writing today.

I worked with a major publisher, O’Reilly Media Inc., and the wonderful editorial skills of Andy Oram helped me on both books. Editors are awesome – they push, prod, ask questions, push for clarity, and say things that make your book better. But they create a ton of work – you’ll get feedback such as “Perhaps you could merge those two chapters?” or “Chapter 4 needs to be broken into two chapters, and you need to really go into much more depth”. That often happens after you think you’re finished. You’ll get asked for extra chapters, rewrites, more or less content, and complete changes in style. It makes your book better. Between the first edition and second edition of my first book, Andy helped me change my style from a formal computer science style to a more conversational, chatty style – the kind that I use in this blog.

Writing a book isn’t a social experience. You need to enjoy being alone with your thoughts. Prepare for one hour of inspiration and conversation to turn into a hundred hours of hard labor and iteration. If it takes a couple of thousand hours to write a book, ten of them are the inspirational ones where you create the fundamental ideas. I wrote much of the second book in my parent’s Winnebago – parked on the grass, a good distance from the house, deliberately without wifi, and with nothing inside to distract me.

So, why do it? I enjoy writing – there’s rewarding impact in sharing knowledge with thousands of people. If you’re lucky, someone’s success or their impact will be because of what you shared. Or maybe you change how someone thinks or sees the world. Or you make their life better. It’s also cool to see your name on the cover, and to feel it in your hands – it’s even cooler when it’s translated into a language you don’t understand. I wonder what joy there is in knowing people are reading a digital copy? The digital sales on the royalty statement have never quite inspired me the same way.

Have fun. See you soon.